According to this standard, characteristics such as abrasion resistance, cut resistance, tearing strength, puncture resistance and impact protection are tested. In conjunction with the pictogram, four numbers and one, or two letters, will be displayed. These signs indicate the performance of the glove. 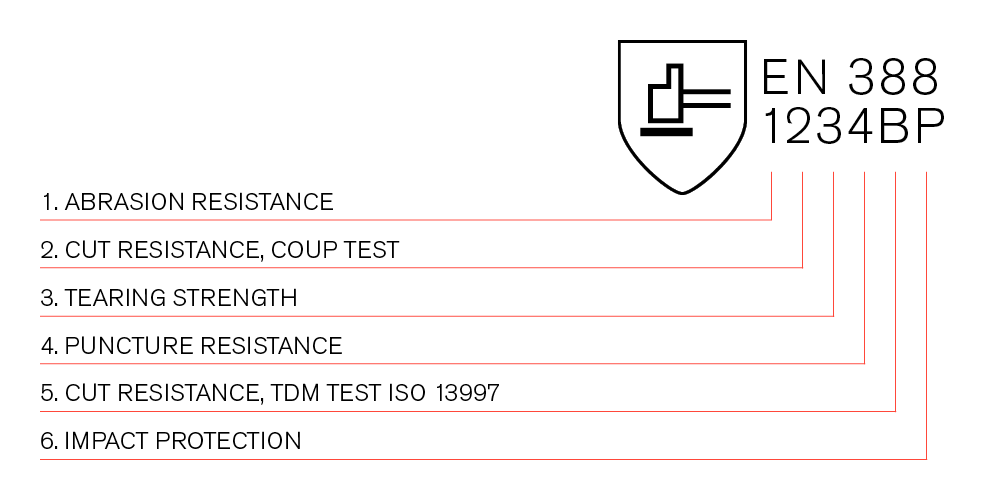 The material is subjected to abrasion by a sandpaper under a determined pressure. The protection level is indicated on a scale of 1 to 4 depending on the number of turns required until a hole appears in the material. The higher the number is, the better the resistance to abrasion.

The cut protection is tested. A knife is passed over the glove material until it cuts through. The protection level is given by a number between 1 and 5, where 5 indicates the highest cut protection. If the material dulls the knife during this test, the cut test ISO 13997(TDM test) shall be performed instead, see point 5.

The force required to tear the glove material apart is measured. The protection level is indicated by a number between 1 and 4, where 4 indicates the strongest material.

Based on the amount of force required to puncture the material with a tip. The protection function is indicated by a number between 1 and 4, where 4 indicates the strongest material.

If the knife gets dull during the coup test, see point 2, this test shall be performed instead. The result is given by a letter, A to F, where F indicates the highest level of protection. If any of these letters is given, this method determines the protection level instead of the coup test.

If the glove has an impact protection, this information is given by the letter P as the 6th and last sign. If no P sign, no impact protection is claimed.
EN 388:2003
This is the old version of the standard against mechanical risks. The differences compared to the 2016 version are the paper grid in the abrasion test and how to perform testing of cut resistant fibers. Also not applicable to test impact protection.
There are still many protective gloves on the market labeled according to the old version of this standard. These are as good to use as the new marked gloves.
Important to understand is: it’s not the gloves performances that has changed. It is the way of testing the performances that has changed!